How I learned to stop worrying and love Twitter

If you have even a passing interest in social media, and haven't been under a rock for the last six months, then you will have noticed a lot of media hype and web buzz about the 'microblogging' service Twitter.

Twitter is the latest and greatest cause celebre of the social web and, like MySpace and Facebook before it, has its share of detractors in the 'real' media - in fact, for a relatively simple and useful service it has generated a surprising number of them. For example, ABC News issued a sort of 'call for complainers' who are "sick of social networking" (is it better to do it, teeth gritted, than just not bother?), and apparently super-sleb Simon Cowell has decreed that tedious tweeting celebrities should desist.

Not to be outdone in these matters, the Daily Mail even warned Twitter may be making us immoral. This satirical video, a bit more humorously than most of the detractors, sums up the Twitter backlash fairly well.

All the commotion is doing no harm to Twitter's exponential growth, but the commentary can tend to be quite misinformed, painting Twitter usage as timewasting and/or voyeuristic, only of interest to the bored and/or boring, constantly lifestreaming the mundane/pointless. Now, admittedly, any of these sometimes apply, but that sort of baby=bathwater logic would see us ditching telephone conversations, emails, blogs, and why not the published and broadcast media.

Instead, suspending judgment for a moment, and thinking of Twitter as simply an alternative communication medium,

Followers, but not twits

Twitter combines elements of other communication channels in quite an innovative way. The Twitter service essentially allows a user to post a short message (up to 140 characters long) which is then distributed to everyone who "follows" that person. The stream of outgoing posts is also aggregated on the user's profile page.

Although the shortness of tweets immediately calls to mind comparisons with texting and instant messaging services, Twitter's role in online life probably falls closer to blogging (hence the term "microblogging"). This is because messages are not typically distributed one-to-one (although you can also do this) but one-to-many.

The asymmetric "following" model means that, unlike classic social networking by "friending" (i.e. I ask you to be my friend, you accept), you can choose to follow someone interesting to you, who may or may not have an interest in following you back. This has allowed the entry of high-profile users who mainly use the service to 'broadcast'. A year or so ago the most followed Twitterati generally came from the tech world, but around the time Barack Obama's campaign team began tweeting his daily whereabouts, celebrities (e.g. Jonathan Ross), organisations and companies have cottoned on to the utility of Twitter as an alternative channel to reach their publics. Many now argue however that the nature of Twitter has been transformative, and these traditional content-originators are now engaging in more of a conversation with their followers.

The rush to tweet has fuelled the surge in mainstream media coverage, and social media-related blogs and news sites are awash with articles on how to leverage Twitter for your brand and how to rapidly gain more followers, all of which is valuable to people who are operating in that kind of space, but may seem less relevant in the educational context. But I would say the value of Twitter is that it can be used in various ways. It is probably one of the most useful tools to come along for educators and researchers in a long time. 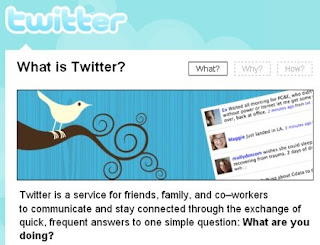 Despite all the advice out there, I wouldn't say there is a right or wrong way to use Twitter. My tweets are probably 90% e-learning or related, but as with 'small talk' in face-to-face interaction, sometimes I send someone a quick hello or respond to what they have said, or post a news link.

Perhaps the dubious advice on Twitter's home page which suggests you should use it to answer the question 'what are you doing' is partly responsible for the notion that it is mainly used for 'status updates' (a la Facebook), sometimes known as 'lifestreaming'. As with any piece of writing, you need to consider the audience of followers who will read your updates, and decide what's appropriate and useful.

At this point I should backtrack a bit: all this discussion of how one should tweet actually puts the cart before the horse - I wouldn't even worry about that until you have found some people to follow and take some time to immerse yourself in the conversation. Generally speaking, those of us working in education have the most use for Twitter as a way of building a network (sometimes referred to as a personal learning network or PLN).

A PLN, simply defined, is a community which shares interests and information. In her recent PLN survey, Sue Waters found a 'microblogging tool e.g. Twitter' was cited by her respondents as their most useful PLN tool. A PLN acts as a filter, selecting what they regard as useful and interesting information. Of course at times there can be too much information - as with feed readers and mailing lists, as the flow of information increases, there is no room for reader's guilt. There are already enough things in life that have to be read - emails and assignments, for example. The joy of your PLN stream is that you can dip your toes in as and when.

I follow a combination of people, who fall into the following groups, although there is overlap:
This may seem like an obvious sort of remark but it's hard to realise the benefit of your network until you have one. So quite often to start putting a Twitter network together, it's best to check any blogs you read for evidence of the blogger's twittername, ask colleagues you work with or know through other networks if anyone tweets, or check out some twitter directories (e.g. wefollow). Once you are following a few interesting people, take a sneaky look at who they follow and regularly converse with, and follow them too.

In Some tips for Twitter Danny Nicholson provides helpful advice on getting started with Twitter. It's also worth checking out Twitter Handbook for Teachers from educators in Western Australia and this Twitter Workshop Guide from Mira Vogel at Goldsmiths.

Finally, 'personal brand' talk aside, this guide from Mashable will help you design and distribute your new online self to your satisfaction.

If you already use Twitter, I have a very quick survey that I would love some more feedback on.
Posted by Leo at 14:30